7 cognitive errors that affect our productivity 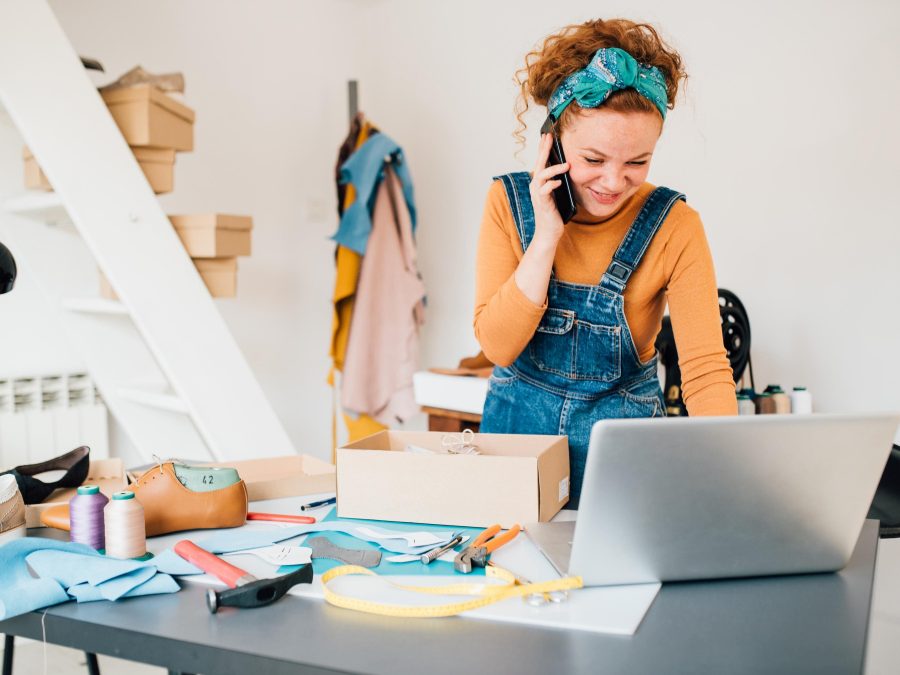 Productivity has been a buzzword for some time. Certainly due to fact that productive work enables you to achieve the intended results much faster and with less effort. It is even more decisive in the context of modern ways like remote work, which makes it easier to lose productivity in favor of procrastination, or put everything on hold. In today’s text, we will try to present 7 cognitive errors that negatively affect productivity both during remote and stationary work.

7 cognitive errors that affect our productivity – table of contents:

What are cognitive errors?

First things first, let’s define cognitive errors because it is a term that almost everyone has met with but a few can accurately explain. Cognitive errors are faulty patterns of reasoning that arise from limited mental resources or insufficient time and motivation to form correct judgments.

Interestingly, cognitive errors influence the vast majority of people because they are very subjective by nature. Of course, depending on the person, these errors can impact more or less everyday life, i.e. decision-making, problem perception, and productivity. Being aware that there is such a thing as a cognitive error can not only eliminate its negative impact but also make such a person much more productive and aware of their behavioral patterns.

7 cognitive errors that affect our productivity

The old tried and tested ways are not always the best. Most people who use the attachment effect in their daily lives disagree with this statement. It is a cognitive error that favors ways and methods that have been used for a long time. At the same time, the attachment effect is characterized by an unwillingness to try new approaches and learn new information. Trying occasionally a different work technique, approach to solving a difficulty or verifying one’s knowledge can break the attachment effect and lead you to find better solutions.

New ways of performing one’s duties can optimize work time resulting in the ability to get more things done, in much less time. The attachment effect has been particularly pronounced during the pandemic because remote work is for people many new.

A few people are eager to admit a mistake and that’s the cause of the blind spot effect. It is the tendency to overlook one’s shortcomings while blaming others for their mistakes. This cognitive error affects productivity quite a bit because it prevents people from being aware of constructive criticism. Good criticism without pejorative overtones can be a great building material for better organization of work and more reliable performance of assigned duties and tasks.

Hierarchy is the backbone of any workplace as it helps to maintain order and delegate or synchronize tasks. Still, if mishandled, it can significantly interfere with an employee’s productivity. It happens usually due to the belief of the superiors that their reasoning is flawless. Authorities can make mistakes, misjudge a situation or act half-assedly. It is for this reason that relying solely on authority can reduce productivity and contribute to poorer work performance.

Blind acceptance of orders and opinions of superiors harms employees. Of course, it is not about questioning every decision of your superior, but about critical thinking and readiness to express your own opinion and reasoning.

This cognitive error is extremely common, due to the specificity of personality traits. Cognitive dissonance involves choosing only those arguments that support the decision already made while ignoring any arguments that might contradict it. For instance, smokers say that smoke because it makes them feel less stressed, but they know it’s unhealthy, yet they try to find a reason to support their behavior as they would feel awkward if they went around smoking and saying it’s unhealthy. To break the dissonance and feel at ease we try to find arguments that support our behavior.

To make sure not to be biased by our subjective opinion and prior experience and make the right decisions, a good piece of advice is to take a step back, calm down and critically analyze all the pros and cons. Cognitive dissonance can improve productivity because of the re-analysis of a particular decision. Sometimes seeing the bigger picture from a wider angle with a clear mind enables us to change approach, get the job done much faster and in the long run, may help us see the behavioral and cognitive patterns we have been unaware of.

Planning and organizing time is especially far-reaching in the case of remote work when it’s the employees who set their schedules for the day. A cognitive error called the planning illusion is nothing more than a tendency to underestimate the time it takes to complete a task, as well as the amount of work involved. This illusion was particularly noticeable during the first months of the pandemic when workers had to organize their day and many were incapable of doing it well.

Working from home involves many factors that may distract an employee, making them far less productive. Additionally, the illusion of planning tends to turn our attention away from work to indulge in various time-consuming, binging and occasionally addictive activities (such as entertainment). When this happens, productivity drops dramatically due to the misconception: “I’m sure I’ll get it done, so I can play some more.” Still, with the proper organization of time, you will avoid the illusion of planning so you can meet deadlines on time with no stress.

The Pollyanna Effect, also known as the Pollyanna Rule, is a reasoning pattern that comes from a character Eleanor from H. Porter’s novel. It is a tendency to find positive aspects in every situation and ignore the negative, unpleasant and uncomfortable ones.

However, you can harness this pattern’s power in a conscious way to improve your productivity. Thinking about positive things is a great motivator because of the reward center, the part of the brain responsible for motivation and behavioral control. Ponder about something positive while doing chores and you may complete the task faster as you’ll know there is a reward waiting once the job is done. This is why the Pollyanna effect can have a positive impact on productivity.

A cognitive error that we can refer to as a common “herd mentality.” This principle concerns the tendency to think or do things just because a lot of people do so. It is worth noting that this principle is closely related to the behavior of a crowd, so it is stuck quite firmly in the human subconscious.

Becoming aware of the principle and how it operates in practice helps you to break the previous ways of acting and solving problems, which translates into productivity. It also develops an individual approach to work and enables critical judgment that is not then imposed by the general view or majority. 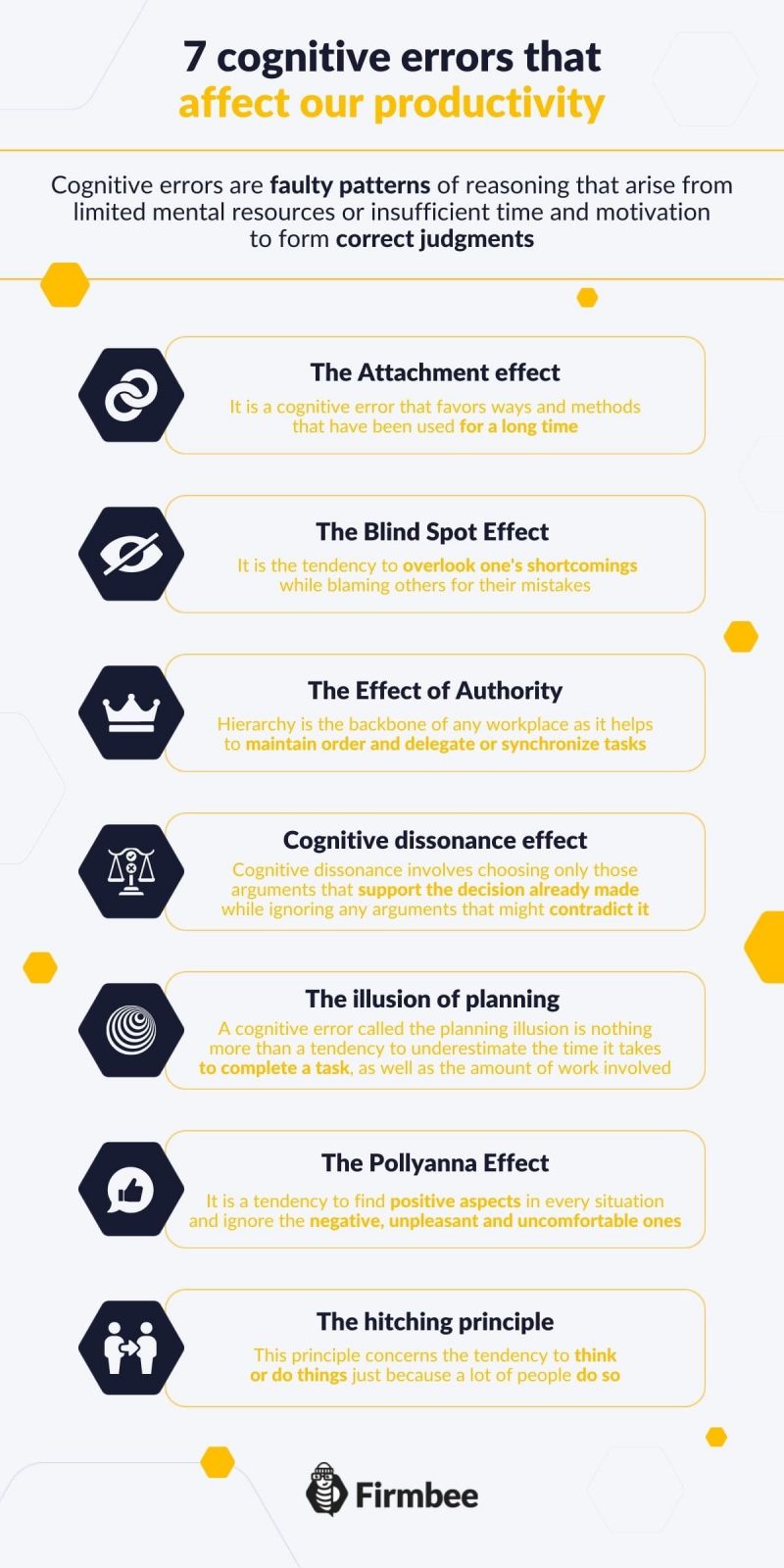 The conclusions that emerge after analyzing the above examples are clear – there are cognitive errors that can effectively interfere with our productivity. Nevertheless, acknowledging them and learning the ways they influence us can make our life much easier at work and home. We will become more sensible, smarter and cooler. Our productivity will thrive no matter what industry or mode of work we are at.

Chceck out our video about cognitive errors that impact your work

Check out our 5 Proven methods that will increase your motivation.