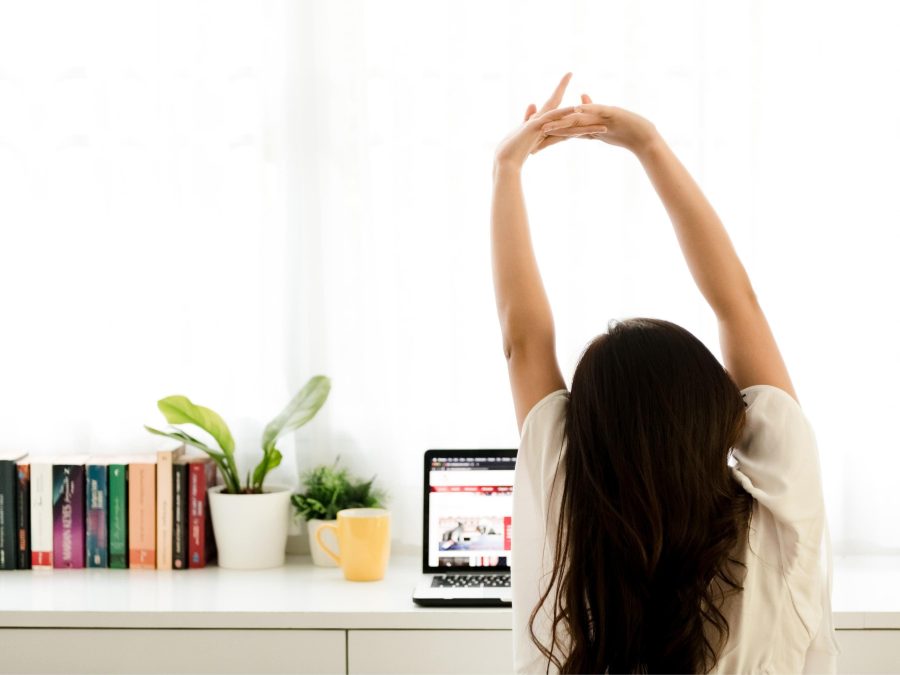 What is social loafing?

Social loafing is a phenomenon described by social psychologist as the tendency of individuals to work less productively, when working in group. This paradoxical fact was first described in 1913 by Maximilian Ringelmann, a French engineer, who studied behavior of horses. His discovery was that two animals together pull the cart with less force than the same two animals, when pull the separate carts.

This research was repeated with humans as objects of observation and the results were the same. When one person pulls the rope – gives 100%, when two pulls – they give 93% of their effort, when three pulls –they expend 85% of their strength, and eight people pulling together gives only 49% of their effort each.

Further research into people’s performance in groups, made by Derek J. de Solla Price reveal that 50% of all work in the company is done by a small number of people, roughly 10% of all employees is responsible for 50% of the effect

It means that company that grows has to deal with the problem of rise in incompetence, laziness and social loafing associated with the growth of its size. The bigger the company is the bigger the problem is – the research reveals that in the company with 9 employees, 3 of them does the half of work, but in the company with 100 employees it is only the 10 of them that contributes to that percent. This is all called social loafing effect, sometimes is referred to as free-rider effect or Ringelmann effect. It occurs in all situations, where people work together in larger groups.

What is interesting, social loafing does not occur to such scale in eastern countries – for example Japan has no problem with this phenomenon.

Japanese employees keep the level of their performance high no matter how big their team ar. The opposite can be observed in all western countries – Americans and Europeans have to be placed in smaller, more diverse groups to perform well. In such groups individual effort has to be trackable and recognized otherwise performance declines.

There are two important implications of social loafing, or two other aspects that can be linked to this effect such as: diffusion of responsibility and risky shift. Diffusion of responsibility means that individual team members are able to hide behind team’s choices. It is difficult to hold somebody accountable for poor decision, when nobody knows whose decision exactly it was. The other effect related to social loafing is risky shift, where team members take higher risk that they would normally do on their own.

To imagine how the social loafing works below find just a few examples of this phenomenon: 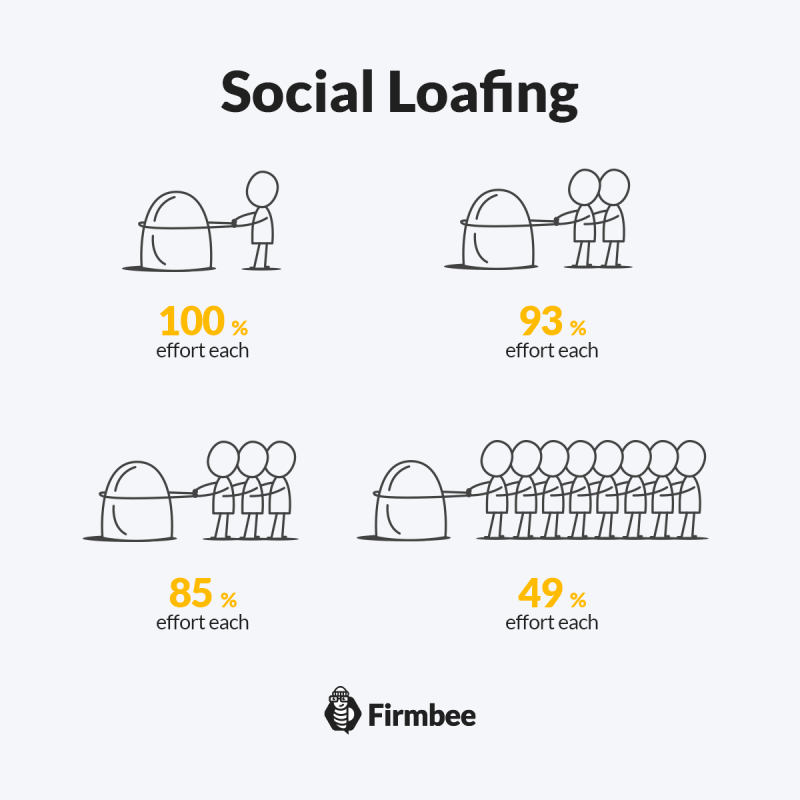 What are the main factors that increase social loafing? Are there any ways to decrease social loafing? In detail there are many of such factors, but the size of team group is the most important one. Social laziness may occur in every team, hence it is good to be aware how it can be prevented. 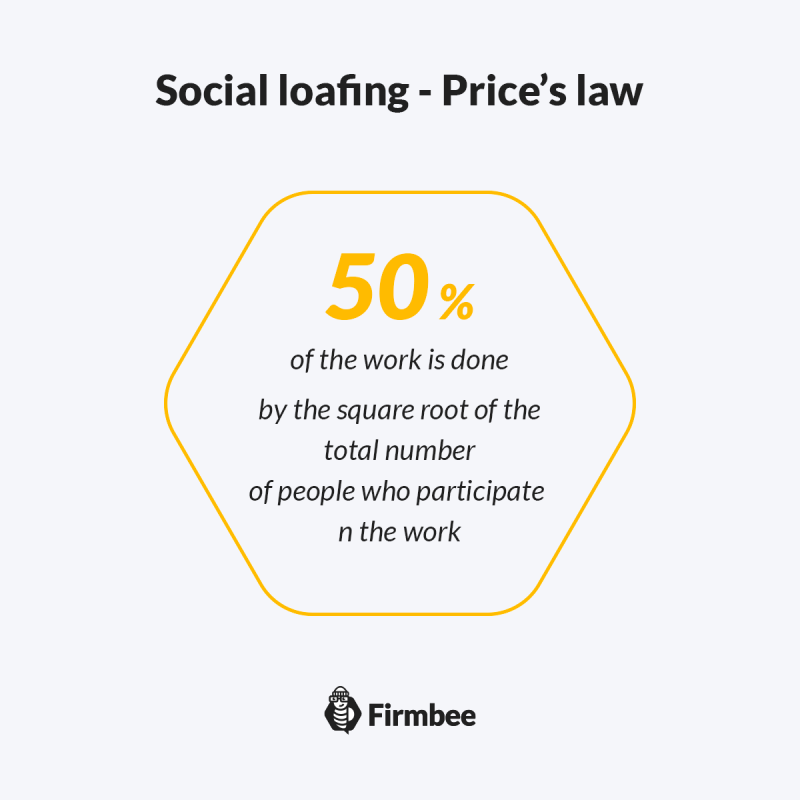 Effects of social loafing in the organization

Social loafing is not just any laziness or lack of motivation, it is seen as blatant abuse of social norms and brings detrimental effect for the whole team involved. It influences productivity negatively as well as hinders the development of the company. Social loafing is one of the main sources of waste, because it influences the time and resources spending without brining any positive results.

Individuals, who only pretend to work, still have to be provided with furniture, equipment, salaries and benefits. What is even more dangerous it encourages even more laziness among the team members. More diligent team members feel demotivated and discouraged to put more effort, some of them may decide to leave, since nobody wishes to work alone for mutual benefit. Summarizing, social loafing creates really toxic atmosphere in teams, what can lead to incivility and conflicts. 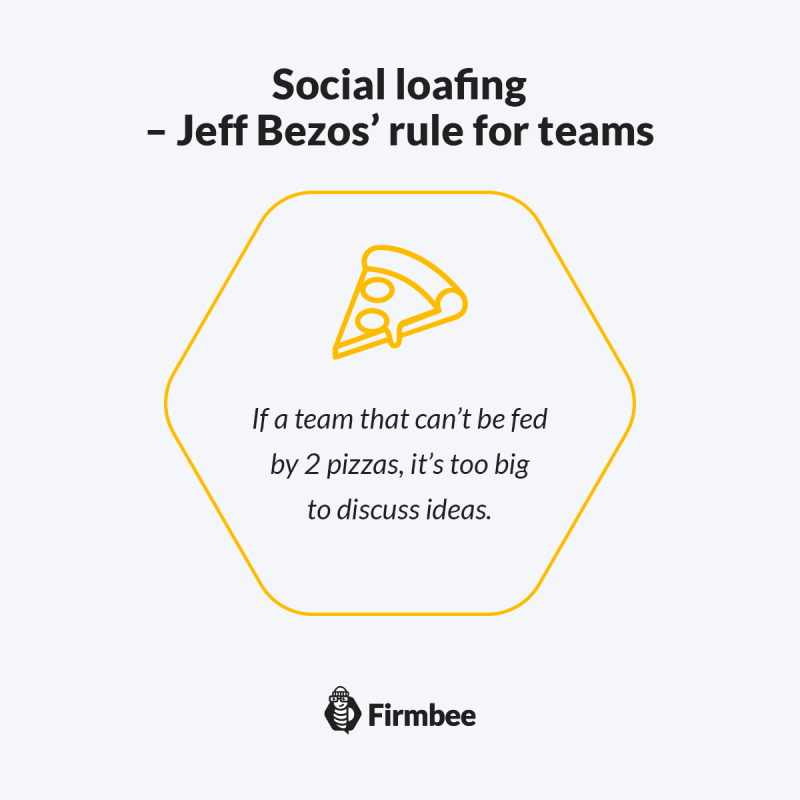 How to overcome social loafing in organizations

Since the concept of social loafing is well-documented there are already ways to prevent it. Effective managers understand that responsibility for a project cannot be handed down to a huge group of unidentified individuals and know the strategies that help to restrain the flow of idleness in their company.

How to stop social loafing at your workplace? 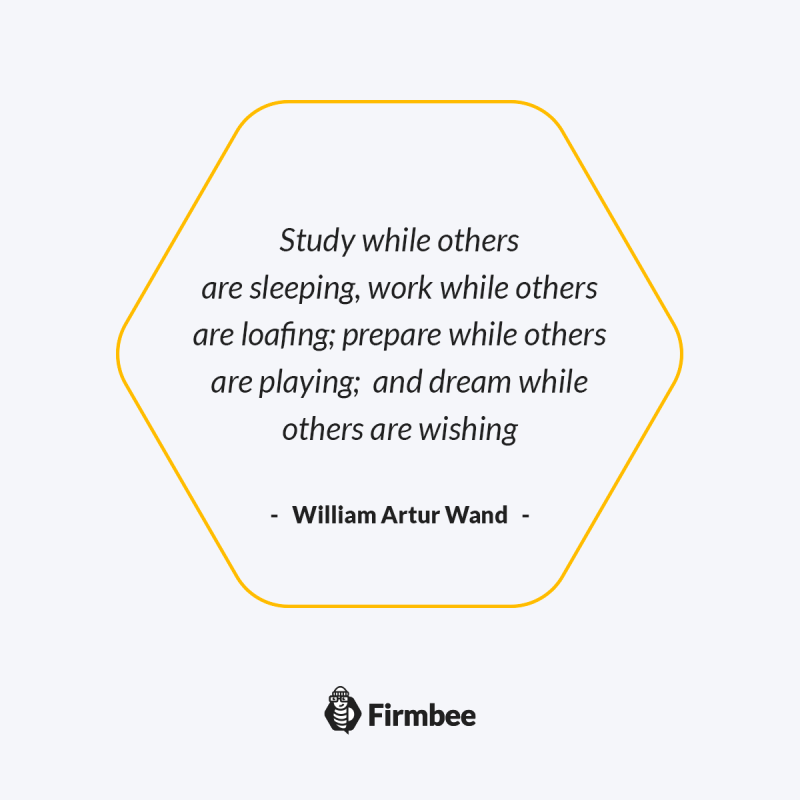 Social loafing is a well-known psychological concept that describes the diffusion of responsibility seen in larger groups. The phenomenon of social loafing is connected to decreased productivity and low performance of individuals that are required to work as a part of the team. It impact the growth of the company and creates toxic culture of work. Efficient managers have a chance to deal with this effect by careful group management and by lowering the size of their teams.